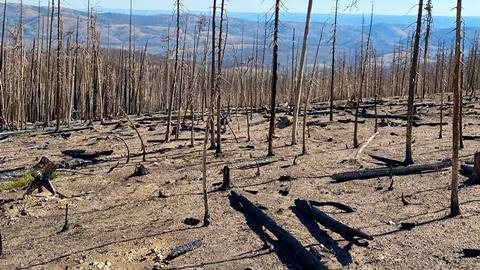 Playing with fire: how wildfire shapes the soil microbiome of the Colorado Rockies

The high elevation coniferous forests in the southern Rocky Mountains of Colorado (USA) provide more than just a beautiful landscape for winter sports and hiking: they are vital ecosystems that provide myriad ecosystem services.

The high elevation coniferous forests in the southern Rocky Mountains of Colorado (USA) provide more than just a beautiful landscape for winter sports and hiking: they are vital ecosystems that provide myriad ecosystem services. Often referred to as the ‘water towers of the west’, these watersheds are a critical source of clean water for agriculture, municipal, and industrial use. These environments also perform nutrient cycling and carbon storage, and provide habitat for diverse wildlife. Across the globe, these types of ecosystems are suffering the consequences of climate change due to altered precipitation patterns, irregular snowpack conditions and spring snowmelt timing, increased aridity, and, most dramatically in the western United States, shifting wildfire behaviour. These pine-dominated forests are evolutionarily adapted to frequent, low and moderate severity wildfire, with thick bark and pinecones that release seeds upon heating. but the high severity wildfires that are increasing in frequency and size are threatening the resilience of these precious ecosystems. 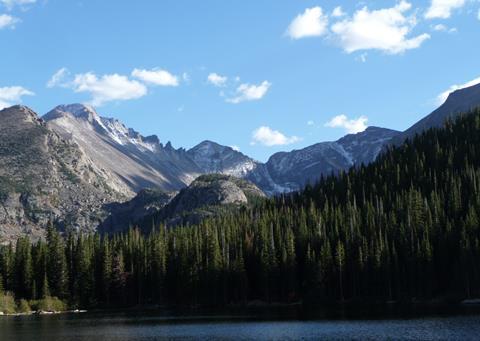 A ‘small but mighty’ facet of these ecosystems is the soil microbiome. Although generally invisible to the naked eye, the organisms that make up the soil microbiome (archaea, bacteria, fungi, and viruses) play a crucial role in the health of coniferous forests; microbial biomass alone can be responsible for up to 20% of total carbon input into soil organic matter in these systems. In addition to carbon, the soil microbiome is vital in the cycling of important nutrients for vegetation (e.g. nitrogen), the stabilisation of soil organic matter, and the formation of essential symbioses with plants. Specifically, ectomycorrhizal fungi are obligate symbiotic partners for the dominant tree species in these forests, Pinus contorta (lodgepole pine), meaning that adverse effects of wildfire on these fungal species could alter pine re-establishment post-fire.

Despite the importance of the microorganisms that call soil home, we still lack a clear understanding of how increasingly severe wildfire can impact the soil microbiome. Wildfire influences these soil communities both directly via heating of the soil, and indirectly by altering soil chemistry for prolonged periods after the fire. This immediate, direct impact reduces soil microbial biomass, likely due to heat-induced lysis of cells. Across longer timescales, indirect changes to soil chemistry may cause long-term shifts in the composition of the soil microbiome. Field-based compositional studies have pinpointed potential pyrophilous (‘fire loving’) taxa and hypothesized that they may encode traits within their genome – such as heat resistance and the ability to metabolise fire-transformed organic matter - that allow them to thrive in recently burned soils. This compositional research has been complemented by laboratory studies that have supported the hypothesised traits in these putative pyrophilous taxa. For example, one recent study showed that the fungal species

The field of post-fire soil microbial ecology is missing a clear link between these two types of studies. We know that these microbes (like P. domesticum) can do certain things in the lab, but lab and field conditions are often very different from one another. Contrastingly, we observe some of these taxa in field investigations of burned soils, but the mechanisms explaining why and how they are there are unclear. In our recent study, Nelson et al (2022), worked to bridge this gap using a comprehensive field-generated dataset that centred around genome-resolved insights into the soil microbiome. By using a suite of coupled microbiology and geochemistry tools, we could successfully see which taxa dominated the post-fire soil microbiome and infer the mechanisms they used to persist in these altered soils. 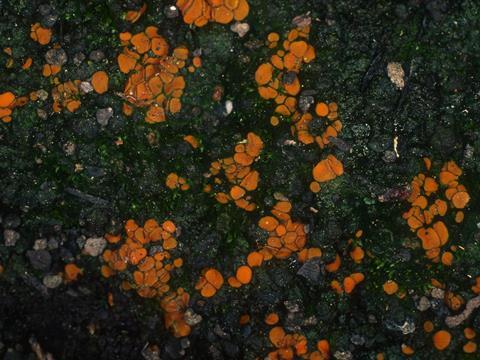 Pyronema domesticum has been shown to grow on fire-transformed organic matter, also known as pyrogenic carbon.

In this study, we sampled soils one year following low and high severity wildfire in two burn scars along the Colorado-Wyoming border and interrogated these materials with a suite of sequencing and analytical chemistry tools. To characterize the soil microbiome community composition and function, we used a combination of 16S rRNA gene & ITS amplicon sequencing, coupled with genome-resolved metagenomics and metatranscriptomics. This combination of datasets allowed us to confirm compositional shifts we saw in both the marker gene and metagenomics sequencing and revealed which genes were encoded and expressed by different taxa and how this shifted with increasing burn severity. This comprehensive microbial dataset allowed the in-depth characterisation of the entire post-fire soil microbiome, including bacteria (637 metagenome-assembled genomes, MAGs), fungi (2 MAGs), and viruses (2399 DNA and RNA viral MAGs), which are all intimately connected. This dataset was also coupled with Fourier transform ion cyclotron resonance mass spectrometry (FTICR-MS) to characterise shifts in organic substrates for microbial metabolism with wildfire severity. This post-fire soil dataset is the most comprehensive to date, including every facet of the soil microbiome. With it, we queried both why and how certain taxa are dominant in post-fire soils and were able see whether putative pyrophilous traits, hypothesised in previous studies, were encoded and expressed by fire-dominant taxa. The novel coupled viral and high-resolution chemistry dataset also enabled deeper questions about the feedbacks between the soil microbiome and carbon cycle in post-fire terrestrial systems.

In our one-year post-fire snapshot, we found that pyrophilous traits aided in the dominance of certain MAGs, largely from the bacterial phyla Actinobacteria. These dominant MAGs in surface soils impacted by high severity wildfire represented the Actinobacteria genera Arthrobacter, Blastococcus, and SCTD01, three taxa discussed in other wildfire literature. Most of these dominant MAGs encoded genes for sporulation and heat shock, traits that would aid in heat resistance. We even found that, with increasing severity (from low to high severity), the relative abundance of these thermal resistance genes significantly increased. Another stress-resistance trait that was encoded by dominant MAGs was the potential for biosynthesis of mycothiol, an oxidative stress tolerance gene, and osmoprotectants (e.g., glycine betaine, trehalose) which could help them persist in dry soil conditions. These combined stress tolerance traits likely enabled these taxa to persist during fire conditions and thrive in the altered physiochemical conditions following the fire. 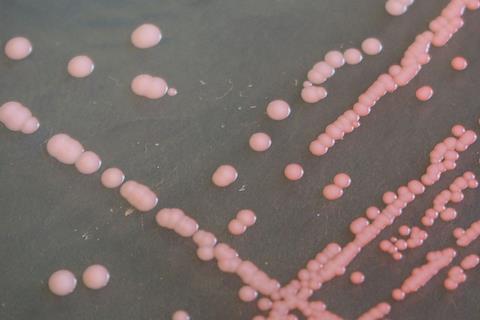 Many studies have found that wildfire causes a significant decrease in soil microbial biomass, which likely opens new niche space in the burned soils. Another pyrophilous trait of our post-fire MAG dataset was fast growth, which would enable certain bacteria to quickly grow and occupy the newly available niche space following wildfire. Using patterns of codon usage bias within our curated genome catalogue, we were able to infer maximum growth rates across our bacterial MAG dataset and found that MAGs that were dominant in surface soils impacted by high severity wildfire generally had the potential to grow faster. This additional trait could allow the taxa, like Blastococcus, to quickly grow and become dominant in the post-fire soil microbiome that we profiled a year after the wildfire.

Wildfire transforms soil organic matter into polyaromatic structures, commonly known as pyrogenic carbon, that is usually considered as having long residence times in soil and an important addition to carbon sequestration. The chemical shifts were verified in our high-resolution mass spectrometry dataset, with increasing aromaticity of the soil organic matter with increasing burn severity. But, in contrast to the idea of inherent recalcitrance of pyrogenic carbon, we found that pyrophilous fungi and bacteria encoded and expressed genes for degrading fire-derived aromatic compounds. This opposes the traditional thought that wildfire can be beneficial for the carbon cycle of terrestrial ecosystems via initial carbon loss due to vegetation combustion but long-term sequestration due to the formation of unavailable pyrogenic carbon. Our dataset suggests that high severity wildfire preferentially selects for a microbial community of members that can and are using this ‘long residence time’ carbon pool, potentially shifting these systems from net carbon sinks to carbon sources. Although this specific topic area requires more investigation, these findings have implications for linkages between wildfire and climate change; an ongoing project in our research group aims to use this field-generated genome database to inform a mechanistic ecosystem model and test hypotheses centred around post-fire carbon cycling. 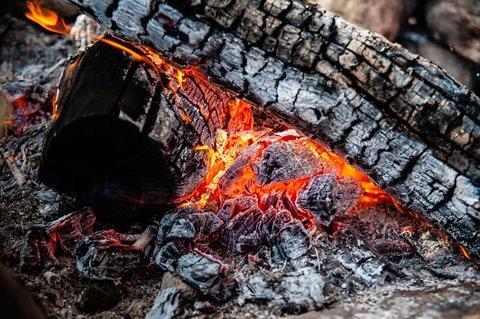 In addition to bacterial and microbial processing of soil organic matter, we also found that viruses infecting and augmenting bacterial hosts likely influenced soil organic matter in these post-fire systems. We looked at this by inventorying all auxiliary metabolic genes (AMGs) found in the viral MAGs, which are used to hijack and manipulate the metabolism of the bacterial host. Of the 773 putative AMGs found in our viral dataset, approximately 200 were linked to carbon cycling: genes for processing carbohydrates, peptidases responsible for degrading microbial necromass, or genes related to cell growth. Although the importance of bacterial-viral interactions in augmenting the carbon cycle has been shown in marine and other soil systems, this is the first study to tease out how these interactions may influence ecosystem dynamics after a wildfire disturbance. This is also the first of its kind to holistically study each individual facet of the soil microbiome – archaea, bacteria, fungi, and viruses. Moving forward in the field, we highlight the importance of considering cross-kingdom interactions for developing understanding of how microbiomes function and influence their environment.

Along with critical shifts in microbially-mediated carbon cycling functions following wildfire, we also found the loss of several functions that are crucial for a healthy terrestrial ecosystem. The dataset had little evidence of both nitrogen fixation and nitrification, two key functions that are carried out by the soil microbiome in forests. The lack of expressed nitrification genes (amoA) was perhaps the most startling, as post-wildfire systems generally have high concentrations of ash-derived ammonium that’s available to soil microbes. There was also the depletion of likely more fire-sensitive taxa with severe wildfire. For example, the bacterial phyla Acidobacteria and Verrucomicrobia, were depleted with burn severity in both the 16S rRNA gene and metagenomics sequencing datasets. These phyla generally contribute important ecosystem functions; members within the Acidobacteria specifically have been considered a keystone species in soil environments for soil organic matter degradation. Another lost ecosystem function with fire was represented by a near complete loss of ectomycorrhizal fungal species, which are obligate symbionts for many pine species. 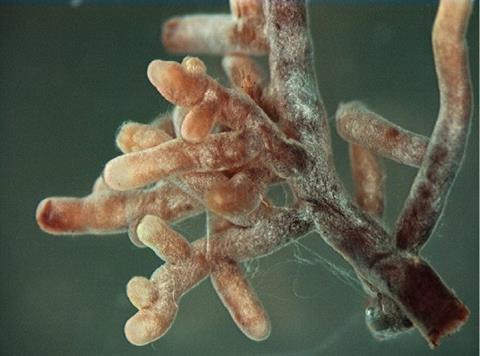 In addition to shedding light on beneficial traits that allow certain microbial taxa to thrive in burned soils, this study has also allowed us to create more constrained hypotheses to test moving forward. A clear next question is where the colonizing post-fire microbes are coming from - whether they are present in the deeper soils and migrate upwards, or come in from spores transported from unburned locations? Other approaches such as the use of more controlled burns in pyrocosm studies may shed light on this question, while further physiological characterization of isolated pyrophilous microorganisms in the laboratory can complement the myriad genomic inferences made from metagenomic sequencing. There is also a clear need for more temporal resolution in such post-fire studies; moving forward we plan to fill in the successional timeline, with field studies that use ‘space for time’ chrono-sequence approaches to investigate soil microbiome resilience over years to decades post-fire.

In summary, through better understanding of how each member of the post-fire soil microbiome is shaped by and adapts to wildfire events in the forests of the southern Rockies, we can hope to further unravel how shifting wildfire behaviour will alter the ecosystem services they provide (e.g. carbon storage, establishment of vegetation). Although unseen to the naked eye, the soil microbiome is undoubtably mighty and critical to life in forests in fire-prone regions of the western US

You're not signed in.